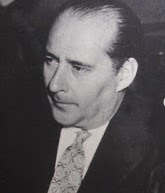 Film director Roberto Rossellini died on this day in 1977 in Rome, the city that provided the backdrop to his greatest work and earned him the reputation as the 'father of neo-realism'.  Rossellini had been associated with the Fascist regime during the early part of the Second World War, in part due to his friendship with Vittorio Mussolini, the film producer son of the dictator, Benito Mussolini.  His three wartime movies, The White Ship, A Pilot Returns and The Man with a Cross, all had elements of pro-Fascist propaganda.  But after Mussolini was dismissed and his government collapsed in 1943, Rossellini began work on the anti-Fascist film Rome, Open City, which he described as a history of Rome under Nazi occupation.  It starred the popular actor Aldo Fabrizi in the role of a priest ultimately executed by the Nazis and the actress Anna Magnani as the heroine, Pina, but also featured footage of real Roman citizens originally intended to be used in two short documentary films.  Rossellini also used non-professional actors for many scenes, feeling that they could portray the hardships and poverty of Rome under occupation more authentically.  Read more… 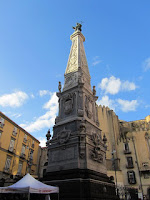 
Creative genius whose legacy is still visible around Naples

The painter, sculptor and architect Domenico Antonio Vaccaro, who created some notable sculptures and designed some of the finest churches and palaces around Naples in the early 18th century, was born in the great southern Italian city on June 3, 1678.  Vaccaro was also an accomplished painter, but it is his architectural legacy for which he is most remembered.  Among the famous churches attributed to Vaccaro are the Chiesa di San Michele Arcangelo, which overlooks Piazza Dante, and the Chiesa di Santa Maria della Concezione a Montecalvario, which can be found in the Spanish Quarter, while he completed the Chiesa di Santa Maria della Stella in the district of the same name.  His notable palaces included the Palazzo Spinelli di Tarsia, just off Via Toledo, and the beautiful late Baroque palace, the Palazzo dell’Immacolatella, built on the water’s edge in the 1740s and now dwarfed by the enormous ocean-going ships that dock either side of it. Vaccaro was also responsible for finishing the carved obelisk topped by a bronze statue in Piazza di San Domenico Maggiore.  He sculpted a statue of San Gennaro, the patron saint of Naples, in the city’s cathedral.  Read more…


Follower of Caravaggio passed on his techniques to the next generation

Pietro Paolini, a painter in the Baroque period in Italy, was born on this day in 1603 in Lucca in Tuscany.  Sometimes referred to as Il Lucchese, Paolini was a follower of the controversial Italian artist Caravaggio.  He also founded an academy in his native city and taught the next generation of painters in Lucca.  Paolini’s father, Tommaso, sent him to Rome when he was 16 to train in the workshop of Angelo Caroselli, who was a follower of Caravaggio.  Paolini had the opportunity to study various schools and techniques, which is reflected in the flexible style of his work. He was exposed to the second generation of painters in the Caravaggio tradition such as Bartolomeo Manfredi, Cecco del Caravaggio and Bartolomeo Cavarozzi.  The principal themes of Paolini’s work were the subjects popularised by Caravaggio around the turn of the 17th century involving lower class people such as hawkers, prostitutes and musicians. Some of his paintings have allegorical meanings, such as The Allegory of the Five Senses, which depicts a darkened inn with people engaged in playing music and drinking, each representing one of the five senses.  Read more…


Priest who devoted himself to helping the poor

The Blessed Vincent Romano, a priest from Torre del Greco on the Bay of Naples who became known for his tireless devotion to helping the poor, was born on this day in 1751.  Admired for his simple way of life and his efforts in particular to look after the wellbeing of orphaned children, he was nicknamed “the worker priest” by the local community. His commitment to helping poor people extended across the whole Neapolitan region.  He would demonstrate his willingness to roll up his sleeves in a different way in 1794 after his church – now the Basilica of Santa Croce – was all but destroyed by the eruption of Vesuvius.  Not only did Romano devote many hours to organising the rebuilding he actually cleared a good deal of rubble with his own hands.  He was born Vincenzo Domenico Romano to poor parents in Naples. He developed a strong faith as a child and began to study for the priesthood in Naples at the age of 14.  He was ordained as a priest in 1775 and assigned to Torre del Greco, where he led a simple and austere life.  The eruption of Vesuvius in June 1794 destroyed most of Torre del Greco as a lava flow swept down to the sea.  Read more…