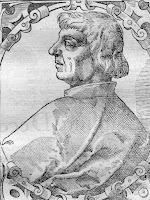 Flavio Biondo, the first historian to write about the concept of the Middle Ages, died on this day in 1463 in Rome.  Biondo, who is also sometimes referred to as Flavius Biondus, his Latin name, wrote Historiarum, which ran to 32 volumes. It was a comprehensive treatment of both Europe and Christendom from the sack of Rome by the Goths in AD 410 to the rise of Italian cities in the 15th century.  His work provided a definite chronological scheme, from ancient Rome up to his own time, which started the idea of the 1000 year period we now refer to as the Middle Ages. It is known that the writer Niccolò Machiavelli often consulted this work.  Biondo was born in 1392 in Forlì in Romagna, which is now part of the region of Emilia-Romagna. He was educated well and during a brief stay in Milan he discovered, and was able to transcribe, the only existing manuscript of Cicero’s dialogue, Brutus.  Biondo trained as a notary before moving to Rome, where he was appointed as an apostolic secretary.  After embarking on diplomatic missions throughout Italy, he wrote De Roma instaurata (Rome Restored), a three volume work that reconstructed ancient Roman topography.  Read more… 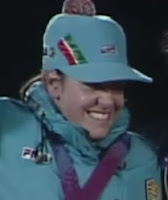 The three-times Olympic skiing champion Deborah Compagnoni was born on this day in 1970 in Bormio, northern Lombardy.  Regarded as the greatest Italian female skier of all-time, she won gold medals at the 1992, 1994 and 1998 Winter Olympics.  Despite suffering two serious cruciate ligament injuries, she also won multiple events at the Alpine Skiing World Cup between 1992 and 1998.  Born in Bormio but raised in Santa Caterina di Valfurva, in Valtellina, Compagnoni’s talent became obvious at a young age but she began suffering injuries also at an early age.  At just 16 years old she won the bronze medal in the downhill at the World junior championships in 1987, and the following year won the junior title in giant slalom and achieved her first podium in the World Cup.  However, shortly afterwards she broke her right knee at Val d'Isére downhill, the first of a number of major injuries, but for which she could have attained even greater success.  Compagnoni won her first race in the World Cup in 1992, in the super-G. She also won the gold medal at the Winter Olympics of the same year, again in the super-G, at Albertville in France.  Read more…


Soprano put the spotlight back on ‘forgotten’ composers and singers

Mezzo-soprano Cecilia Bartoli was born on this day in 1966 in Rome. Bartoli is renowned for her interpretations of the music of Mozart and Rossini and for her performances of music by some of the lesser-known Baroque and 19th century composers.  Her parents were both professional singers and gave her music lessons themselves and her first public performance was at the age of eight when she appeared as the shepherd boy in Tosca.  Bartoli studied at the Conservatorio di Santa Cecilia in Rome and made her professional opera debut in 1987 at the Arena di Verona.  The following year she earned rave reviews for her portrayal of Rosina in Rossini’s The Barber of Seville in Germany and Switzerland.  Bartoli made her debut at La Scala in 1996, followed by the Metropolitan Opera in 1997 and the Royal Opera House in 2001.  She has performed and recorded Baroque music by composers such as Gluck, Vivaldi, Haydn and Salieri.  She has sold more than ten million copies of her albums, received numerous gold and platinum certificates and been given many awards and honours.  Read more…


Medici daughter who was born to rule

Claudia de’ Medici, who ruled the Tyrol region of Austria while her son was still a minor, was born on this day in 1604 in the Palazzo Pitti in Florence.  Claudia was the daughter of Ferdinando I de’ Medici, Grand Duke of Tuscany, and his wife Christina of Lorraine.  She was destined for a marital alliance with someone equally aristocratic and became engaged at just four years old to Federico Ubaldo della Rovere, Duke of Urbino.  She was educated in a convent where, in addition to piety, she learned to play the harp and paint pictures.  At the age of 16, she married Federico, Duke of Urbino and was initially disappointed when she found out he had his mistress installed in the ducal palace.  But two years later she had a daughter with him, Vittoria della Rovere. Her husband died a year later in 1623 leaving her a widow at the age of 19.  Claudia remarried in 1626 to Leopold V, Archduke of Austria, and became the Archduchess consort of Austria. She had five children by Leopold before his death six years later in 1632.  She assumed the regency of Tyrol in the name of her son, Ferdinand Charles, and held it until 1646 when Ferdinand became 18.  Read more…